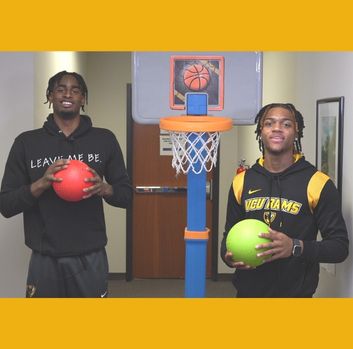 VCU And Synergy Team Up For EnCircle!

Virginia Commonwealth University's men's basketball team defeated Davidson Saturday for its 11th victory of the season. For one enCircle foster family, it was the second win in a two-day basketball doubleheader.

That’s because the three brothers being cared for by Andrew and Theresa Little spent Friday evening hanging out and playing games with VCU players Jalen DeLoach and Jayden Nunn and former Ram Levi Stockard III at enCircle’s Richmond office, and they were in the Siegel Center stands cheering on Saturday’s 89-72 win.

This was all made possible by Synergy Technical, which provides enCircle’s IT services and partners with VCU to bring players and the community together before every home game.

"It’s so cool that they’re willing to be here the night before a game," enCircle CEO Ray Ratke told Synergy President Rohanna Meade.

"They never say no, if they can make work in their schedule," Meade said. "They love it, they absolutely love it."

"We want to motivate the youth, the kids in foster care," Nunn said. "I know we’re role models to them."

"My dad is big on giving back, so I’ve been giving back since I was like 5 years old," DeLoach said, laughing. "It means everything to me, to be honest. It means the world to me."

For the boys, ages 10, 8 and 4, it was two days of VIP treatment, with handshakes, hugs, cornhole, and, of course, hallway basketball, followed by courtside greetings and photos — and a big win for their new favorite players.

Synergy donates to a local nonprofit after every VCU home victory. EnCircle was the recipient of Saturday’s gift of $5,000. We are grateful and big fans of VCU and Synergy Technical— GO RAMS!