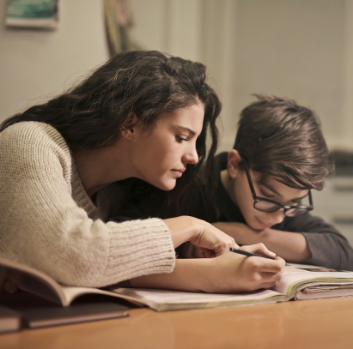 By Dan Montgomery
When the pandemic forced Minnick School staff and students into more and more remote learning, more and more parents and caregivers began asking: How can I help my student stay engaged with their schoolwork on days they’re not actually in school?
Part of the answer: Minnick Schools’ behavior analysts developed a list of strategies that might help, then began producing a series of instructional videos for parents and caregivers, says Amanda Buchmeier, Minnick’s supervisor of applied behavior analysis services. “We create a PowerPoint presentation, then record audio of ourselves delivering it,” she says. “After that, we recruited some staff volunteers to role-play the strategy, then we add commentary before and after the demonstration explaining what to look for and what occurred.” The result is an easy-to-follow video giving parents and caregivers strategies for keeping students on task.
The first video is on reinforcement versus bribery (a subject every parent may want to study up on!). It is being shared with families who have expressed behavioral challenges surrounding remote instruction at home and who have asked for assistance, Buchmeier says. “So far, we’ve had several families thank us for the resource,” she says.
Upcoming topics include pairing, using reinforcement effectively, and using visual schedules and timers. As usual in enCircle’s world, people are working together to make everything happen. Buchmeier and Board Certified Behavior Analysts Miranda Ely, Beth Hassler, and Dustin Israel create and record the PowerPoints. Stephanie Humphreys, a long-term substitute teacher; Molly Conley, an assistant teacher; and Jennifer Hitt, assistant principal at Harrisonburg Minnick, are the videos’ role-play actors.
The very thought of role-playing on video could give some people stage fright, but Buchmeier says that was the easy part.“We often incorporate role-plays into staff training, so this hasn’t been all that different,” she says. “The biggest shift for us has been recording everything and keeping our presentations brief and free of technical jargon.”
Facebook Share
Twitter Share
Google + Share
VIEW ALL