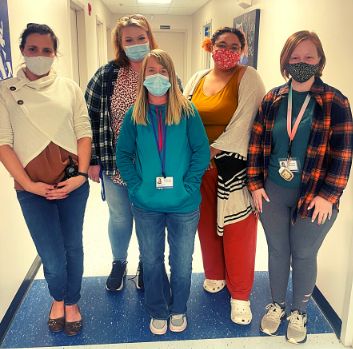 Harrisonburg Heroes: “When Who You Are Shines Through”

Our Minnick School staff in Harrisonburg do amazing work every day with the children they teach in the building, but on a recent afternoon, they ran out of the building to help people in their community.

Shortly after students had left for the day on Thursday, October 21, the staff inside heard a loud boom and looked out to find a terrible, two-car accident right in front of the school on Virginia Avenue. Responding immediately, Minnick staff were the first people on the scene. As Interim Principal Jennifer Hitt described it, "all hands were on deck as some were assisting the individuals in the vehicles, some directing traffic, which was stopped in both directions, and some even running into our building to get our fire extinguishers to put out a car fire."

The chaotic situation lasted more than an hour, but Minnick staff were able to help direct drivers to turn around safely in the school parking lot. They, along with neighboring Dollar General employees, made sure the bus full of middle schoolers headed to a game had water and access to the bathrooms while they waited for the accident to be cleared.

The shock of a bad car accident practically on their doorstep was traumatic, but it also brought out the best in the team. "That’s when who you are shines through," said Hitt. Though she is not surprised by her team’s heroic response, she is justifiably proud. As she told her staff in an email later that night, "You guys went above and beyond today and I am so blessed to be a part of what you all stand for as educators and as amazing individuals."