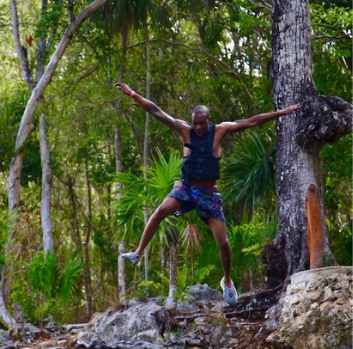 EnCircle Hero — On And Off The Job

It’s a 40th birthday trip Family Care Provider Jorel Puryear will never forget. He and his girlfriend, along with another couple, were on vacation in Mexico having the time of their lives. They had plans to go to an adventure park to jump off rock cliffs. But that morning Jorel said, “I don’t even feel like doing that. And then I was like alright, come on.” And it’s a good thing Jorel changed his mind.

All was going perfectly and they were having a blast, until the man who jumped off the cliff behind Jorel didn’t resurface. By that time Jorel had made his way back up to the top for another jump and noticed the desperation below. “He jumped straight down, but never came up!”

Other swimmers had managed to grab the man and were dragging him through the water to the side. From the top of the cliff Jorel yelled, “Keep his head above water!” He says his lifesaving training with enCircle just kicked in. “I was like, should I go down there and help? And then something just said ‘Go!’ — it was God.” He ran down the hill toward the man and the people who were trying to save his life,  “Get out of the way!” Jorel took over.

“I pumped that guy’s chest about five times, I mean HARD! He was purple and blue — no response — he was dead.”

Jorel worked feverishly to save this stranger’s life, while the man’s wife and 5-year-old daughter watched in horror. His CPR training became automatic with each repetition. He says, “At that last pump, it all came up, all the water, everything. He started groaning, so I turned him on his side because I knew he was conscious.”

Jorel says after bystanders realized the man would survive, everyone broke out into loud applause and cheering — giving him a “thumbs up.” “I told the man’s wife and daughter, he’s OK. He’s conscious now. They were just crying and crying.” The applause, pats on the back and “thank yous” continued as Jorel and his friends walked toward the exit. “It happened so fast, I just had to react. You can’t really think about it, you just gotta go.”

Jorel has been working with adults as an enCircle FCP for more than five years, and currently has two people that he supports at his home in Hampton. And although he renews his CPR training each year, May 19th was the first time he ever had to use it. “That’s why you’ve got to pay attention in that training. Usually, I’m laid back, but something just told me to act. It was interesting.”

Interesting — a bit of an understatement after saving a life. Thank you Jorel for being an enCircle hero, on and off the job.